Did you know that eating a penny could seriously harm your pet? We recently had cute little Chiquita in the hospital for this very reason. Her owner brought her in because she was not acting like herself. She was tired all the time and her gums weren’t as pink as they should be. When we x-rayed her stomach…an object the size and shape of a penny was revealed. Blood work showed that her red blood cells were very low which explained why her gums were pale. At this point, we were positive that she had swallowed a penny that was manufactured after 1983 and was suffering from zinc toxicity. An interesting fact is that pennies weren’t made from zinc until 1983. Before then, they were primarily copper. When a pet swallows a penny made from zinc, it sits in their stomach where the stomach acid slowly starts breaking it down, releasing toxic levels of zinc into the body. The toxic levels of zinc destroys the animals red blood cells faster than their body can replace them. As the red blood cells are destroyed, hemoglobin is released into the body, which builds up and wreaks havoc on the liver and kidneys. As you can tell, zinc toxicity is a serious and possibly fatal situation. Signs that an animal may be suffering from this phenomenon are pale gums, lethargy, increased breathing rate, yellow skin or gums, and dark red or orange urine. Thankfully, we were able to remove the coin safely and painlessly with an endoscope – a penny from 1987 was the culprit! 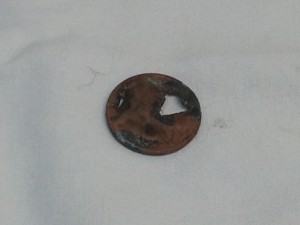 After a few days of TLC from our staff and IV fluids and medications, Chiquita has made a full recovery. Here is a picture of Chiquita at her last check up wearing her rock star outfit. She is feeling much better and her blood tests are back to normal. Also, her gums are almost as pink as her lovely fur. 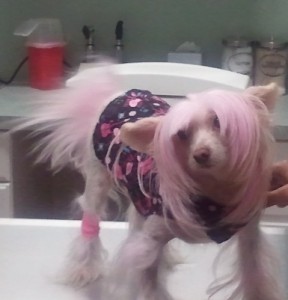